We Strive to make the right clothing match for You!

“The Clothier of Today’s Gentleman” Since 1972

Each team member at The Sir Shop is fully committed to helping you find the right match for your needs.  Whether formal or casual we have the staff and knowledge to get it right.

The overall quality of our products and knowledge of our staff is second only to our outstanding level of customer service.

We work closely with our customers to find the best fit both financially and product wise, and we deliver what we promise. When you call, we answer!

You don’t just want to find a good store that gets the job done; you want a company that strives for excellence and delivers it with each and every sale.  Be assured you can expect that with The Sir Shop.

Celebrating its 40th anniversary in 2011, the Sir Shop in the Statesboro Mall continues to offer cutting edge and traditional style clothing for men as our culture trends towards a much more casual form of dress.

“When I started working in the men’s clothing business in 1980, I would say that we sold 65 percent dress clothes to 35 percent casual clothes,” said Keith Boyett, the owner of the Sir Shop. “That has completely changed. We sell at least 65 percent casual now, if not more.”

Founded in 1971 by Jim Long and Robert Lamb, the Sir Shop is now solely owned by Boyett who has not seen fit to change the original formula implemented by Long and Lamb.

“People probably think that the smaller, specialty retailers such as ourselves copy larger stores with the inventory that we carry, but that is not true at all,” Boyett said. “We actually are the retailers that take a chance on discovering a new line. We are always looking for what is hot, or about to be hot, and take a chance and carry it. When it becomes popular with stores like ours, that is when the large retailer will pick it up, and we move onto the next hot thing.” 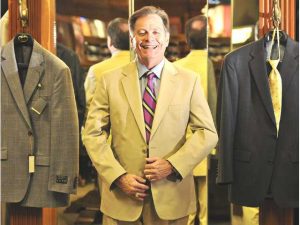 Boyett started his career by working in management at R. J. Pope Men’s Apparel in downtown Statesboro after graduating from the University of Georgia in 1980.

“Jim, Robert, and Ronnie (Pope) were partners, and I went to work for Ronnie,” he said. “In 1985, I was able to buy into the Sir Shop when it had been moved from the Statesboro Mall to a location at the corner of Brannen Street and Gentilly Avenue. I bought out the other partners in the mid nineties, and moved it back to the Mall in 1998.”

Long retired from the business in the late eighties after almost two decades of seeing his vision come to fruition.

“I had worked for eight years at a J. C. Penney’s store in Florida,” Long said. “I was rising up in management for the company, but my vision was to have my own clothing store. My wife Pat was from Statesboro, and we moved here so Pat could be near her family, and I could open my own store. It was a lot of fun.”

Employing numerous teenagers and college students over the years, the time in which they Sir Shop remains a favorite time for many that worked there.

“The exuberant personalities of both Robert and Jim made it totally enjoyable, in conjunction with seeing your friends coming in and out to buy preppy clothes,” said Pam Howard Whitaker who worked there in the early 1980’s. “I wish every teenager could have the opportunity to work in a place with such a relaxed and fun atmosphere.”

Boyett said the ability to change is the underlying tenet of his store’s continued success.

“Being able to adapt to a rapidly changing environment has proven to be invaluable,” he said. “Our target market has gotten younger and younger. Five years ago, we didn’t have one t-shirt to sell, besides the Sir Shop t-shirt. Now, our target market demands a more casual look. Even in the workplace, for many, casual day is every day, but you still have to look nice, even when dressing casually. And we can certainly help someone do that.”

Being local and serving the community is very important to Boyett.

“We invest our money locally,” he said. “Many companies don’t and can’t do that. Corporate stores are loyal to stockholders. We’re loyal to the parents who have sent their kids to the Sir Shop during that transitional time in their lives. And, we’re there for people in their maturing lives.”

Something simple yet refined for your casual day out.

Dress Shoes for your big event.

Formal Wear for every occasion.

We have you covered for cooler weather too!

We have just the right Suit for you.

An array of Sunglasses to choose from.

Come see us for your Tuxedo needs.

A nice assortment of men’s watches.